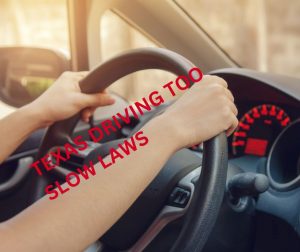 There is no way to dispute the fact that speeding is extremely risky and is the root cause of tens of thousands of accidents and fatalities each year. However, driving below the posted speed limit is just as risky, which is something that not many people think about.

Call our commercial vehicle accident attorneys if you’ve been in an accident.

(a) An operator may not drive so slowly as to impede the normal and reasonable movement of traffic, except when reduced speed is necessary for safe operation or in compliance with law.

There is not a predetermined minimum speed for driving on highways unless it is specifically written somewhere. There are instances when the weather circumstances require that you drive at a slower speed than the posted limit in order to remain safe. See full statute at https://texas.public.law/statutes/tex._transp._code_section_545.363

Is It Illegal To Drive Under Speed Limit in Texas?

On the other hand, you run the risk of being issued a citation for obstructing traffic if it can be demonstrated that your presence on the route is preventing other vehicles from moving forward safely. It is against the law for an operator to drive so slowly as to impede the regular and reasonable passage of traffic, according to Section 545.363 of the Texas Transportation Code. The only exception to this rule is when a slower pace is required for safe operation or for compliance with the law.

Driving too slowly can result in a traffic citation, particularly on highways, so be aware of this possibility. If a driver is going fifteen miles per hour slower than the posted speed limit in conditions that are ideal for driving, then this may be considered to be obstructing traffic, which is a violation of the law.

When approaching an intersection and crossing it, when approaching and going around a curve, when approaching a hill crest, when traveling upon any narrow or winding roadway, or when special hazards exist concerning pedestrians or other traffic or because of weather or highway conditions, a driver is required to slow their vehicle down below the posted speed limits. This duty includes the requirement to “decrease speed.”

How Slow Can You Go Under Speed Limit?

When To Reduce Your Speed

In addition, the pace should be slowed down as much as possible in order to avoid a collision. The gap in speeds between vehicles is one of the most significant contributors to accidents. It is possible for a truck to be traveling so slowly on the highway that it poses a threat to other motorists on the road.

Or, much worse, a tractor-trailer that is parked in an unauthorized manner.

In the end, exercising common sense is the wisest course of action. If the weather is bad, proceed at a slower speed than normal; otherwise, when driving conditions are excellent, keep your speed at or near the posted limit on busy routes like Interstate 10 near Houston, and always slow down when it’s necessary to prevent getting into an accident.

Because large trucks are known to have blind spots that result in a high number of accidents, you might also want to think about the location of your car in relation to an 18-wheeler. Additionally, it might take a commercial vehicle up to one-third longer to come to a stop, therefore it is best to steer clear of situations in which you are following another truck whenever it is practicable to do so.