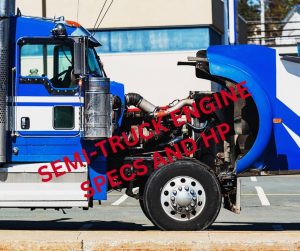 This way, you can ensure that you’re getting the most out of your vehicle – and avoid any potential problems down the road. Here is a quick overview of semi-truck engine specs, so you can learn more about what goes on under the hood.

The average semi-truck engine produces between 400 and 700 horsepower.

The semi-truck has long been known for its colossal size and capabilities, but few know about the power contained within its chassis. With an engine generating between 400-700 horsepower, semi-trucks are capable of powering through highly demanding off-roading surfaces with resounding ease and reliability.

As a result, semi-truck engines are fast becoming the benchmark for all 18 wheelers when it comes to evaluating the performance of their respective engines. The semi-truck is indeed an engineering marvel that continues to astonish many who appreciate its immense power and utilitarian disposition – a true testament to modern day engine technology.

Semi-trucks are an incredible feat of engineering, capable of transporting up to 80,000 pounds of cargo at a time. While this provides a tremendous opportunity for businesses and retailers to transport goods great distances, it is also a major source of concern in regards to highway safety due to the sheer weight and size of the vehicles themselves.

While they are typically subject to the same laws as other motorists, semi-trucks require extra attention from everyone on the road. Drivers should be mindful when overtaking and passing semi-trucks and ensure that any smaller vehicles remain at an appropriate distance. Doing so can help reduce the potential for serious collisions on our highways.

How A Big Rig Engine Works

The average fuel economy for a semi-truck is around 6 miles per gallon.

The average fuel economy for semi-trucks is an economical 6 miles per gallon, making them a cost-effective way to move goods. In addition to the monetary savings, it is important to keep in mind that semi-trucks with higher fuel economy also reduce emissions of pollutants and greenhouse gases contributing to global warming.

To maximize fuel efficiency and its associated benefits, many regulators are exploring new strategies such as using predictive analytics to target the most polluting trucks. Improving gas mileage in this way would not only reduce emissions, but also help contain freight costs in our increasingly competitive global markets.

Most semi-trucks have a diesel engine.

Semi-trucks are an incredibly important tool for the transportation of goods throughout the world. To ensure that hundreds of thousands of these large vehicles operate in an efficient and reliable manner, most semi-trucks are equipped with a diesel engine.

This type of engine offers unparalleled power and durability for extreme driving conditions such as hauling heavy cargo along long distances, making it an ideal power source for these popular transport vehicles.

Furthermore, its low repair costs, fuel efficiency, and lack of exhaust turbulence give it a notable edge over other types of engines. With so many clear benefits to having a diesel engine in semi-trucks, it is no surprise that this type has become the industry standard.

Semi-trucks typically have a transmission with 10 gears or more

Semi-trucks form an integral part of the transportation industry, and have done so for many years. They are specifically designed to handle heavy cargo loads, with a number of features allowing them to do so effectively.

One particularly important feature is the transmission, which has ten or more gears enabling semi-trucks to safely and reliably carry large amounts over various distances and terrains. Indeed, these transmissions are what make semi-trucks such powerful workhorses in the transport world. With advances in technology, it is likely that semi-trucks will continue to play in a vital role going forward too.

To sum it up, semi-trucks have incredible power and size compared to most vehicles on the road. Not only do they have a diesel engine generating around 400 to 700 horsepower, but their size is unmatched with a weight of up to 80,000 pounds.

This requires more fuel as compared to other vehicles, leading to a lower average fuel economy at 6 miles per gallon. Consequently, semi-truck transmissions need additional gears totaling 10 or more in order to handle its immense power and weight. The semi-truck industry is certainly complex and fascinating at the same time! It’s no wonder they continue to be used for transportation needs all over the world.

Visit our Houston personal injury lawyers if you have been involved in an accident.