Many of us have encountered road rage. It can be very dangerous for the average vehicle. However, when tractor-trailer drivers drive with road rage, the consequences can be catastrophic and deadly.

Road rage and aggressive driving is often indicated by irradic lane changes, vulgar yelling and hand gestures, tailgating, extreme braking or acceleration, obstructing traffic, and even exiting the vehicle to start a physical altercation. You should never tailgate as this is often a form of road rage.

You should also keep in mind that many Texas drivers are traveling with a handgun, in accordance with their constitutional rights. 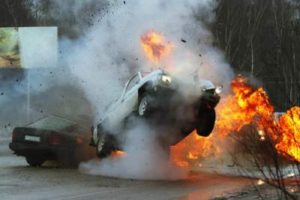 Road rage in 18 wheeler drivers is often caused by massive amounts of stress due to very tight shipping schedules. Lack of sleep can also cause irritation that would be conducive to road rage in big rig drivers.

These cases must be handled timely so contact us soon if you have been involved in road rage induced auto accident. Our firm will help you recover monetary damages and fight to make you legally whole again.

Call the phone number listed above or use the email contact form here to speak to an attorney.

Walker Texas Lawyer is not a member of this law firm, but he does make great videos.

Reports of aggressive driving or Road Rage incidents have increased by about 7 percent each year since 1990, according to the AAA Foundation for Traffic Safety. Reasons for violent disputes that ended in injury or death included:

“He cut me off …”
“She wouldn’t let me pass …”
“It was an argument over a parking space …”
“Nobody gives me the finger …”
“The so-called ‘reasons’ for disputes are actually triggers,” an AAA Foundation for Traffic Safety report observes. “While the event that sparks the incident may be trivial, in every case there exists some reservoir of anger, hostility, or frustration.”

Walker Texas Lawyer would like to remind all drivers that its more important to not engage in the road rage. Its better to Arrive Alive than it is to be Dead Right.