Determining Fault In A Car Accident

Determining Fault In A Car Accident

The person or entity that caused your accident is the at-fault or negligent party. In other words, that person or entity is responsible for any property damage or injuries related to the accident. However, it is not always easy to tell which party is responsible for an accident especially in situations where multiple motor vehicles are involved. Insurance companies, law courts and law enforcement agencies may make the determination of fault in an accident even more complicated.

What Is Negligence In Texas?

Drivers that fail to act cautiously like any normal person would under the same circumstances are negligent drivers. For example, a driver that fails to yield when they are supposed to yield is negligent. If an accident occurs because of negligent behavior from a driver, then that driver is responsible for any damages and injury that result from the accident. However, Texas is a comparative negligence state, which means that both drivers involved in an accident can share fault for an accident.

If they find that you are more than 51 percent responsible for the accident, they may deny your claim. You will only get compensated if you are less 51 percent at fault for the accident. The compensation amount will be reduced by the percentage of responsibility you have for your accident.

At-Fault Party According to  Insurance Companies 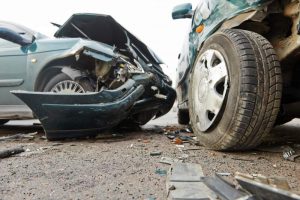 After an accident, you can file a claim for damages incurred with the insurance company of the at-fault party. The insurance company will not automatically accept your claim without evidence that their policy-holder was the negligent party. They will assign your claim to an adjuster who will carry out an investigation into the accident, and also review your settlement claim. Adjusters do the following when they are investigating:

The Police Report For A Car  Crash

Police officers prepare a police report that has information about how the accident happened and other details about the accident.  The investigating law enforcement officer gathers this information by asking witnesses carefully constructed questions. Once the officer believes that enough information has been gathered, the officer submits the report to the police department.

Taking Your Case To The Courts

If the insurance company of the at-fault party denies you compensation, you may have no other option but to take them to court. The court will consider the arguments and evidence presented by your lawyer and the insurance company’s lawyers. They will use this evidence to determine the at-fault party in your accident and calculate the amount of compensation you deserve.