When you ride a motorcycle on the dashed lines between lanes of traffic that move in the same direction, you are lane splitting. Splitting lanes in heavy traffic is an effective way to avoid getting struck from the behind by other motorists, according to a study by the University of California Berkeley. Another benefit of lane splitting is that it makes it less likely for you to suffer torso or head injuries.

However, lane splitting may be risky in a situation where a driver that is not aware of their surroundings attempts to change lanes. Such drivers can strike a motorcyclist on the side and send them reeling into other busy lanes leading to serious injuries and property damage. Since motorcycles are small, drivers of larger vehicles may not see lane splitting motorcycle when changing lanes. 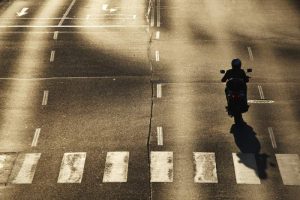 In Texas, you may be ticketed by officers if you split lanes. The fine for lane splitters is $175 in Texas. People who change lanes carelessly or pass other vehicles can get citations. You can still sue for compensation if you were injured when you were lane splitting. But you will need an experienced motorcycle accident lawyer to help you navigate the law in that situation.

You can chose to wear additional protective clothing such as gloves, knee pads, elbow pads and other protective outerwear. There have been attempts to change the law to make it legal for police officers to stop motorcyclists at random to make sure they meet the above requirements. However, many Motorcyclists do not support such changes.

Who Is At Fault In A Lane Splitting Accident?

If you were involved in a crash when you were lane splitting, you will need a lawyer to help you get compensation. The other driver may allege that the motorcycle you caused the crash because you were lane splitting. But Texas is a comparative fault state, which means that more than one person can be responsible for an accident. Both your lawyer and the other party’s lawyer will have to establish the degree of fault that applies to you and the other party. The plaintiff’s compensation amount will be reduced by the percentage of fault assigned to them by the court.